An Interview with Sammy Jo Hester â€“ Gold Medal in General News
This post is from CPOY 68. Click here to view only current posts. 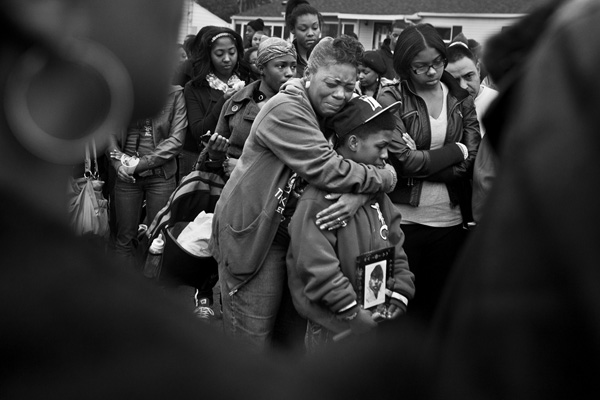 Q. How did you find out about getting a gold medal? What was your first reaction?

A. I was on my way to Flint to visit my old photo editor Jake (ironically where I was interning when I took the winning photo) to talk about portfolio edits when a friend told me. I was in the middle of a traffic detour and I had to pull over until I remembered how to breathe again. When I finally pulled it together, I called Jake to tell him the news. He was so excited when I finally made it to Flint that he picked me up in this huge bear hug and I couldn't stop shaking because I just couldn't believe it.

Q. Can you tell us something about making the winning photo?

A. Working in Flint, we covered a lot of vigils and memorials for victims of homicides and shootings. I remember this one in particular because it seemed to be a random killing. The victim, Laventez, was robbed at gunpoint and then shot. There were over 100 people at his vigil the next day, and upon arriving I could feel the hole that was left in the community after his departure. People were arranged in a circle around Bridget (Laventez's mom) and Laventia (his little brother) as the pastors prayed. I was standing behind the speakers when I watched Bridget grab her son and wrap her arms around him, clutching him as he held on to a photo of his brother. I put up my camera, framing them in between the speakers and took a couple of frames before she let go of him. After the vigil ended, I spoke to her offering her my condolences and thanking her for allowing the reporter and me to come. She thanked me for coming to tell her sons' story before hugging me and then walking away into the crowd of friends and family.

Q. How did you first get into photography?

A. I think I first got into photography because of my dad. It was something both of us enjoyed and bonded over. I grew up in Kentucky on a lot of land, so we would go out and take photos together of little things like the pond and the changing of leaves. We would always get into these contests of who could take the better photo. Eventually, it escalated into a huge passion of mine and a way to express myself and tell stories. Now I pretty much take all the family photos when we are together.

Q. Who are some photographers who especially inspire you, and why do you admire them?

A. I would probably have to say my dad, just because he got me into photography. He doesn't shoot much anymore but he and my mom run a company together and they are pretty much the hardest working people I know. They taught me a lot about working hard to achieve what you want in life and never giving up on your dreams. Even though he's not the greatest photographer and really only takes photos of my family, I think there’s something to be said about personal work and documenting those around you. It's some of the most rewarding work out there and I have him to thank for teaching me that.

Q. Any tips for other college photographers?

A. Hard work and realization. For my first three years studying photojournalism at WKU, I was consistently the bottom of my class. I once even had someone tell me that I should choose a different career path. I think I was just too stubborn to give up on being a photojournalist so I kept at it and kept working. It wasn't until I got an internship with the Flint Journal that I started to make images that I actually liked. I think it took until then for it to click with me that it’s not about me—it’s about this opportunity we all have to share someone's story with the world. When that realization hit, I pushed myself at every assignment I went to, and off the clock, to make the best image I could for each situation and eventually I started to make images that told stories and I think that is one of the most compelling and amazing parts of our industry.